The town of Fiveways is the central location of Breaking Worlds. Our interactives (indoor events) take place in the town and most linears (outdoor events) are set in the nearby countryside.

Built on the southwestern bank of the River Marle, it is a large and busy town by Arginese standards, with perhaps ten thousand people living within the walls, and is a major hub for traders and travellers in the Eastern Reach. As well as the Temple of the Fivefold Way - the sprawling monastery that gives the town its name - it hosts wharves, inns, markets, independent churches, guilds, and many other colourful institutions and inhabitants.

Various different organisations make their home in the town.

As with everywhere in Arginet, the land in and around Fiveways is held by various noble families. The houses of Count Ghen, Count Tremblay, and Count Larue are the most senior, presiding over a double handful of barons and numerous knights.

Numerous churches, orders, and religious fellowships have adherents in the town. The most important are described here.

The Temple of the Fivefold Way

The oldest and largest church in Fiveways - and the origin of its name - is the Temple of the Fivefold Way. They are a monastic animist order, but a scrupulously apolitical one, and they accept people of every faith and creed. The Temple also prints the main local newspaper, the Parish Recorder.
Their temple complex is at the heart of the town in the Temple Quarter and is where the game interactives take place.

The Abbey of the Holy Reflection

This extremely tidy order of blue-robed priests venerating the element of Water also make their home in the Temple Quarter. They believe in the sanctity of knowledge and maintain an impressive library - rivalled in Fiveways only by the collection of the Learned Society - and a well-regarded school.

The quiet neighbourhood of Chapelside is the home of the Ironbound Fellowship. Operating from a small and heavily defended chapterhouse, they are paladins sworn to the cause of Metal, and uphold law and order with quite fanatical zeal. Although the Watch appreciate the help in keeping the peace, concerns have been raised over their hostility towards revenants as well as manifested spirits of elements other than Metal.

A few Seekers of the Utmost live in Fiveways and are rumoured to hold secret meetings in backstreet venues, discussing their faith and goals. Recently they have begun to appear more publically and it is well-known that they are accepting converts.

Easily recognisable in their quartered blue and red tabards, the Watch are the official law enforcement of the town. Their headquarters is just inside Reachgate at the southern end of the town. At present they are clearly understaffed to deal with the crisis of the Breaking and they are always on the lookout for willing citizens to help them carry out their duties.

The Army of the Centre maintains a small military academy next to Reachgate. Aspiring officers are trained in the arts of war and graduate as newly commissioned ensigns - although they tend to throw some parties along the way.

A group of wealthy citizens meet regularly in their clubhouse on Above Bar for intellectual discussion, reading, and trade in rare specimens. Several members of the Society also act as teachers to the children of local notables. Their library of books, though substantial, is not quite as thorough as that of the Holy Reflection - but their collection of curiosities is second to none.

The premier coaching inn of the town, the Four Tuns on Above Bar is where overland travellers with a few ducatto to spare stay the night. Its rivalry with the Trow is almost legendary.

The Trow, in the Marle Docks district, is a substantial inn traditionally favoured by sea captains and known for its fine selection of drinks. Its rivalry with the Four Tuns is almost legendary.

A number of Reformist groups are present in the town, sometimes competing and sometimes collaborating. People are regularly seen extolling the virtues of republicanism and direct democracy on street corners, and there is believed to be at least one anarchist cell based in one of the poorer neighbourhoods.

Fiveways is more or less circular on a map, bounded on the east and northeast by the River Marle and on the other sides by a sturdy town wall. Inside, the buildings pack tightly, divided and connected by a web of streets and alleyways.

Each part of Fiveways has its own character and inhabitants. Traditionally there are seven main neighbourhoods in the town, each of which is described here.

The centre of Fiveways, built on a slight rise above the river, is the home of the Temple of the Fivefold Way. Their sprawling temple complex hosts chapels, monastic quarters, cellars, and various halls, one of which is given over every Friday as a venue for local adventurers to meet and plan.
The Abbey of the Holy Reflection is another significant landmark, and its blue-robed priests and acolytes are a familiar sight.
The whole Temple Quarter is an old and wealthy (if architecturally untidy) neighbourhood and a number of noble families maintain townhouses there.

The stretch of the Great East Road between Reachgate and the Temple Quarter is called Above Bar and it lends this name to the surrounding neighbourhood. It is a prosperous area full of shops and merchants’ houses.
Just inside the wall on either side of Reachgate are two fortified edifices: the Royal Military Academy Fiveways on the north side and the Town Watch headquarters on the south. Both of these are welcomed by local residents as they help discourage crime - not counting the occasional drunken indiscretion of young officer candidates.
The other major landmarks are the Fiveways Learned Society and the Four Tuns, a busy coaching inn that has an old rivalry with the Trow on the other side of town.

Behind the brightly-painted shops and townhouses of Above Bar, the neighbourhood of Pinfold serves a messy but vital purpose - it is the location of the town’s livestock markets and slaughterhouses. The herders and traders make good money, but Pinfold almost always smells bad and few other people live there unless they cannot afford the rents anywhere else.
The main road is Old Midland Road, running east-west from the Temple Quarter through Pinfold Gate. A few local Seekers are known to hold meetings in the streets nearby.

Between the alleys of Pinfold and North Street the quiet neighbourhood of Chapelside nestles below the walls. Mostly inhabited by craftspeople and other commoners of modest means, it has a reputation for being safe and peaceful - both of which are largely due to the Ironbound Fellowship patrolling the area from their fortress-like chapterhouse.

The docks upriver of Fiveways Bridge are smaller and poorer than those downriver since seagoing ships are too large to pass under the bridge, but they are still a lively and important part of the town.
The North Docks district is roughly a wedge with its corners at Rivergate, the Temple Quarter, and Fiveways Bridge, and its sides described by North Street, Bridge Street, and the river. It is known for cramped inns and gambling dens and for outbreaks of violent crime - the main thoroughfare of Cut Throat Lane is named only partly in jest.

Between Fiveways Bridge and Embergate, the riverbank is packed with wharves, jetties, and warehouses. Ships arrive here from ports across Arginet and even the continent - though since the Breaking only a few captains will brave the monsters of the open sea.
Marle Docks is a neighbourhood that tends to be described as ‘colourful’ by the well-to-do, but it is richer and rather safer than North Docks, and hosts many of the town’s more popular drinking establishments. The largest of these by far is the Trow Inn, a traditional haunt of sea captains and a longtime rival of the Four Tuns.

The southeast of Fiveways between Ember Street and Above Bar is considered a rather shabby, down-at-heel area, although it is not quite as undesirable as Pinfold or as crime-ridden as North Docks. It is widely rumoured to be a hotbed of Reformist activity.

Fiveways is ringed by a defensive wall sufficiently tall and strongly built that it would take an expert to scale and heavy artillery to breach. So far it has defended the city from the worst dangers of the Breaking; it also presents a serious (though not impassable) obstacle to anyone trying to get into or out of the town unnoticed.
The wall has five gates, each consecrated to one of the totem spirits.

Fiveways Bridge is the most important crossing of the Marle, carrying the Great East Road from Stow Chine and Carhais across the river, passing by the little settlement of Bar Mills on the east bank. Built on the central pier of the bridge is Bridgegate.
Dedicated to Dragon, almost all travellers to or from the east bank pass through it, and it is correspondingly impressive in size and scale. From the gate to the Temple Quarter the road is called Bridge Street and it is the busiest thoroughfare in the town.

Embergate is built into the southeast of the town wall near the river and dedicated to Phoenix. It gives access to the lower Marle, and is used mostly by farmers and fisherfolk - but since the Breaking the fear of water monsters coming up the river has meant that increasing numbers of travellers heading southeast prefer to take Ember Street rather than a boat.

The Great East Road from the southwest enters Fiveways through Reachgate. Even busier and larger than Bridgegate, this massive structure guards the route between the town and the southern cities of Kellewick and Suddene; in recent years it has also become the main route for travellers to and from Aulin and the Interior.
As the main land entrance to the town it is immense and heavily fortified, and is consecrated to Bear, the patron of community and defence. The road from here to the Temple Quarter is called Above Bar as it runs uphill from the gatehouse bar.

The western gate of the town is called Pinfold Gate after the nearby pens where stray animals are kept. It is dedicated to Tiger, who is said to keep the creatures obedient and docile. These days it is mostly used by herders bringing their animals to market, but in the past it was also the start of the Old Midland Road to Aulin; the route has fallen out of use as travellers prefer to follow the Great East Road before cutting across country into the Interior.

Rivergate in the northern wall is the quietest of the town gates, used by a few farmers and fisherfolk heading up the Marle. It is rumoured to be a smuggler’s route - the gate is seldom heavily guarded, and it would certainly be easy to move goods in and out. The gatehouse is consecrated to Serpent and the road passing through it is called North Street.

A huge marble arch straddles Bridge Street as it leads out of the Temple Quarter. Built more than two hundred years ago on the orders of the Seeker King Enguerrand IV (the self-proclaimed Elior I), the inscriptions were all chiselled away shortly after his assassination, but it remains a major landmark of the town.

A large and recently built ancestor shrine stands just off Ember Street, on the boundary between the Marle Docks and Oldhope.
In life Master Alison was a travelling sage widely respected for her passion, artistic talent, and devotion to the ideals of Fire. She arrived in Fiveways in early 1017, suffering from a long illness, and rather than fade away she chose to end her life in a literal blaze of glory. Her disciples wasted no time in erecting the shrine to her memory and the veneration of her spirit is now an accepted part of the town’s religious life. 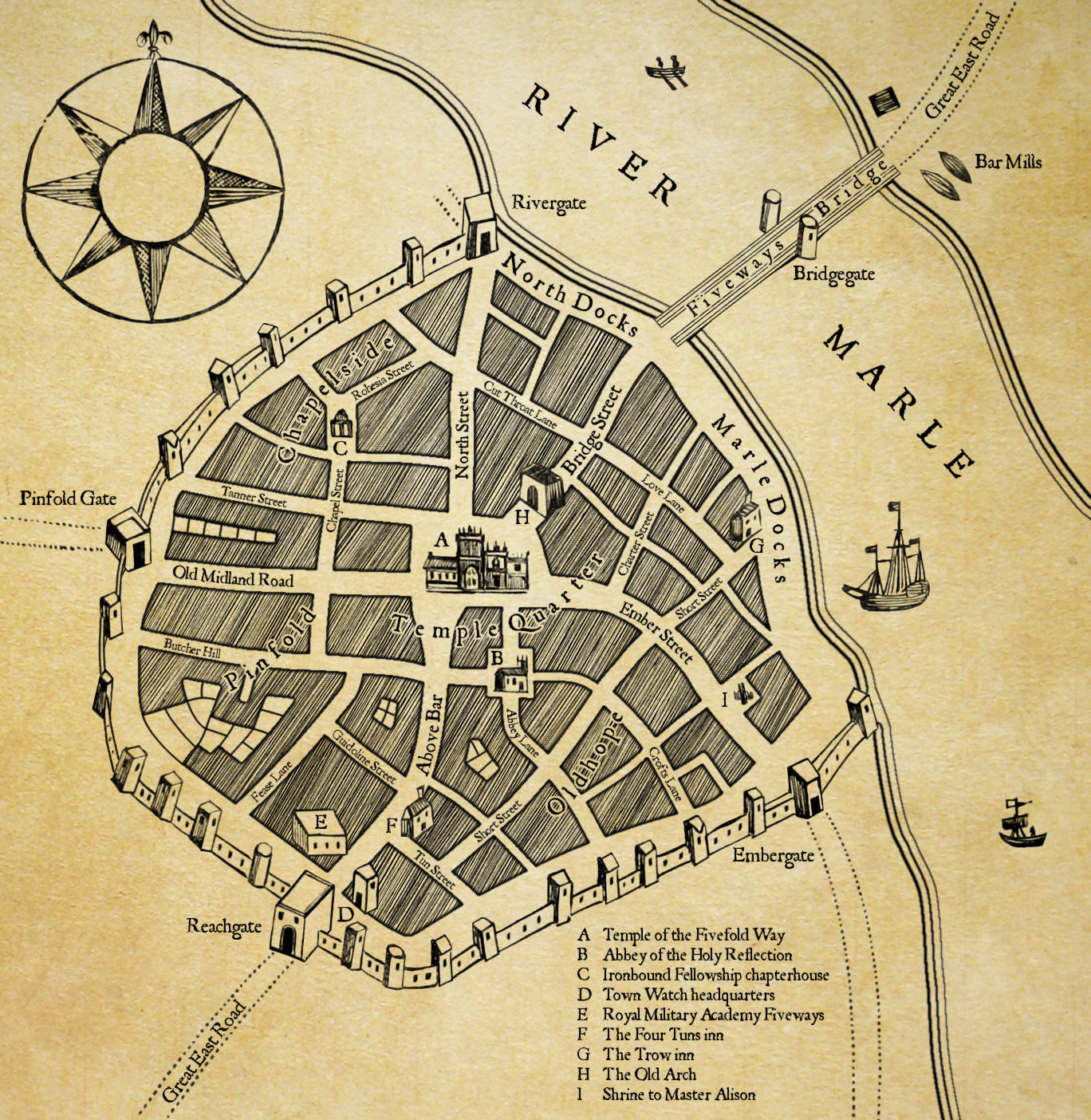