Since the Breaking began, scattered cases have been observed of recently deceased ancestor spirits returning to their bodies and reanimating them as revenants. The term has become universal following a popular campaign in the early months of the Breaking; previously they were also called ‘wights’.

The number of revenants in Arginet is roughly one-hundredth of the number of living mortals although it is slowly increasing. There are about two hundred in Fiveways.

The appearance of revenants has caused considerable distress to many of the living, partly because of the trauma of seeing the dead walking but in large part because of the very awkward legal implications; the Noble Houses’ inheritance traditions mean that land and title pass from parent to eldest child upon the former’s death, and more than one Arginese noble house has been thrown into chaos when the incumbent to the title died and then returned before their heir could inherit…

There has however still been no ruling on whether revenants can inherit, or indeed whether they are people at all. Unsurprisingly many people are agitating for the Royal Council to make a decision one way or the other. In the meantime revenants have limited protection under the law, although the magistrates have a standing order from the treat an attack on one as assault or criminal damage. One major step forward occurred in March 1017 with the decision to allow revenants to vote for Common Members of the Council.

Arginese society is a long way from adjusting to the existence of revenants. Most people view them with revulsion, confusion, or pity, seeing them as horrific and unnatural monsters or as tragic figures sundered from the spirit world. The priesthood have mostly advocated a neutral approach, allowing that revenants are a fairly unsettling sight but reminding the layfolk that they are possessed of (or by) the spirits of revered ancestors. A few, especially within the Reform Coalition, are more accommodating, seeing them as fellow underdogs and hence potential allies - whether the revenants like it or not. 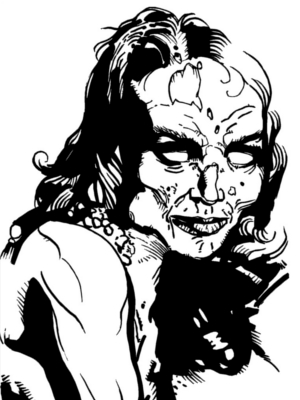 Revenants retain most of their old personalities though their memories are sometimes incomplete. Being dead they do not actually need food or water, but they can eat and drink and most revenants like to do so.
It is far from clear whether they have a natural ‘deathspan’, but they can certainly be destroyed, after which point their spirit leaves the body permanently. No revenant has yet risen who died more than about sixty years ago.

It is easy to distinguish a revenant by their appearance - even being dead for a short time is bad for one’s looks, and that goes double if the death was violent. They are tenacious and can keep body and soul together even in the face of quite horrific injuries. However, they find it harder to bind other spirits to themselves, a fact from which mixed conclusions have been drawn.
Experiments in the first year of the Breaking have shown that revenants are affected in unusual ways by ceremonies of evocation. They can benefit from sacrifice, while attempts to summon their spirits in a séance will cause them harm.

Revenants run a spectrum from looking like slightly discoloured humans to your typical fantasy undead monstrosity. They often have greenish, yellowish or white pallor to the skin and/or dark, sunken eye sockets. Ambitious people might consider white contact lenses or rotting flesh makeup made from latex.

If the person who became a revenant died violently it is entirely usual for their injuries to persist in their new form, leading to excellent opportunities for people who like makeup to physrep dried blood, slit throats, and so on.

It is common for revenants to look more and more undead the older they are, so players can build up their physrepping gradually if they want to.

It was wet. No-one was looking forward to doing the burial in the rain, but it wasn’t like anything would catch in it either and the hole had already been dug. So what they were actually doing was dragging out the eulogies and the stories, getting everyone who knew him to add their own in the hopes that the rain would stop before they had to sodding move.
“So there was this one time,” Josef started, “where me and him went to this pub in Gallowton and there was three lovely ladies servin’ the drinks...”
“Don’t you even start tryin’ to repeat what that bloody Roberta told you!” came an indignant response from the coffin, the room falling deadly silent as they turned to stare, “you know damn well it weren’t true and you’re just usin’ it to try and big yourself up ‘cos she always wanted me put down! Spirits’ breath man, you don’t just use a mate’s funeral to get in someone else’s bed!”
There was a pregnant pause before a guilty cough came from the coffin. “Err… I mean, carry on.”
Josef blinked, “Will? That was you, right?”
“Err, yeah. Sorry.”
“... The hell didn’t you tell us you woke up again?!”
Another pause. “Was a good funeral, seemed a shame to waste it.”
The occupants of the room looked at each other and had to admit he had a point. After a few moments a woman raised her hand. “Does this mean we can skip the bit in the rain and just go straight to the party?”
Everyone quite thoroughly approved of this plan.