Part of a series about the Elements.

Some people show a sufficiently strong affinity to one of the elements that it actually changes their appearance and psyche. These remarkable few are known as the fay or spirit-touched.

It has long been observed that the proportion of fay is high in Arginet and especially so in the nobility. Indeed, in past ages it was believed that the ‘touch’ was hereditary, and the noble houses obsessively recorded their bloodlines in an attempt to keep it to themselves.

The last century saw this disproven by Reformist-minded scholars. It is now known that the touch comes from the actions of an individual. Long devotion to the philosophy of an element, contact with its spirits, and actions aligned with its principles can, in time, bring about a transformation in which a person becomes suffused with the energies of a particular element. This can occur at any point in a person’s life although it is extremely rare before adolescence.

In most respects fay are no different from other humans, but the markings on their skin make them instantly recognisable. Their temperament also leans strongly towards that exhibited by spirits of their element, and those spirits will tend to regard them as one of their own - while spirits of the opposing two elements are likely to be suspicious of or even hostile towards them. 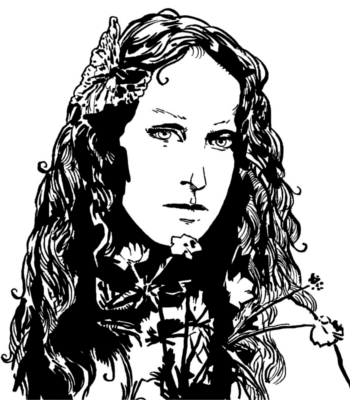 Fay are heavily inspired by lineage at Empire LRP, and as such, physrepping is up to you - as little or as much as you like.

Each element has a colour and shape associated with it, and makeup should incorporate these at a minimum. Coloured contact lenses to match your element are also an option, as would be more elaborate physrepping that reflects your element or its totem animal. Some suggestions are listed below.

None of these confer any mechanical ability - for example, a Water fay with gills cannot breathe underwater, and a Metal fay can never inflict mechanical damage with their nails - but they show a strong affinity for an element and will inspire particular confidence in suitably aligned spirits and certain mortals.