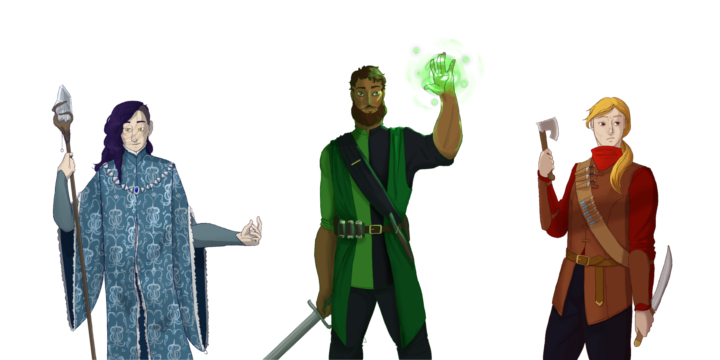 Breaking Worlds was the CLS game from 2016-2018. In the end the plucky PCs took down the sinister scientists of the Solomantzan High Energy Magic Facility, captured their hastily constructed interdimensional fortress, united 5 diverse worlds and performed epic feats of magic in each to fix the Breaking and save the universe.

For many years, the island realm of Arginet has enjoyed peace and prosperity, ruled over by its wise and just nobility and guided by the spirits of the elements and the ancestors. But a year ago, quite without warning, cracks started appearing in the fabric of reality in a metaphysical outburst known simply as the Breaking. Unstable rifts have opened to other planes of existence, disgorging strange creatures both human and monstrous, and the boundaries of the spirit world itself have grown weak.

As the dead rest uneasy in their graves, monsters stalk the land, and the old order struggles to adapt, a loose group of adventurers has come together to explore, exploit, and defend against the tumultuous spirit world and the mysterious threat from beyond.

You are one such adventurer - a native of Arginet or an offworlder who has fallen through the rifts. The Noble Houses, the Royal Armies, and the Reform Coalition are on the lookout for promising recruits to aid them in their struggles, offering opportunities for the ambitious… or desperate.

Breaking Worlds has now been running for a year. For a summary of what’s happened, see the story so far.

Follow this link for a fuller overview of the setting and system.

You can see a map of Arginet and learn about the different regions here. Maps of Fiveways and the nearby area are also available.